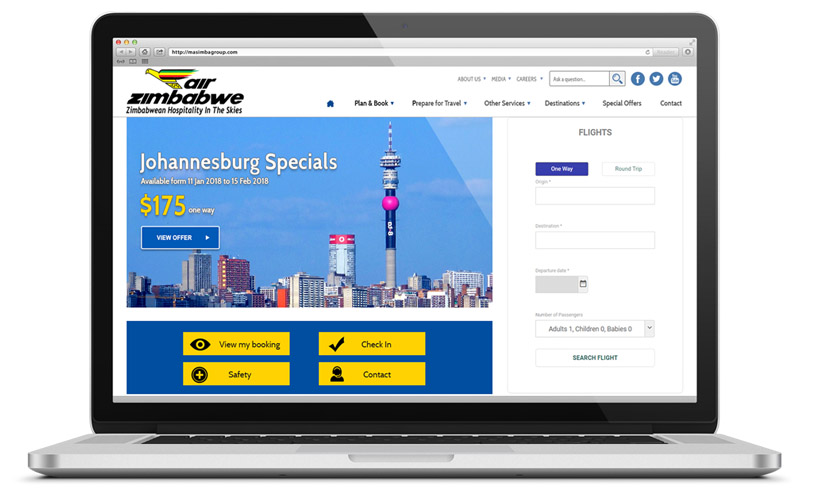 Air Zimbabwe is the national Airline for Zimbabwe whose main purpose is to provide Air travel solutions for the Zimbabwean community, the African continent and the world at large. The airline which is wholly owned by the Government of Zimbabwe was founded in 1967 and has been in existence over the years up to present time. Its roots can be traced back to 1946 when it was known as Central Africa Airways and operated as a joint airline for Nyasaland, Southern Rhodesia and Northern Rhodesia. The tripartite operations continued till 1967 when the joint operations ceased leading to the formation of Air Rhodesia. The airline operated as Air Rhodesia till 1980 when the nation attained its independence and the airline adopted the name Air Zimbabwe. The Airline operated as Air Zimbabwe Corporation until 1997 when Air Zimbabwe Pvt Ltd was created in terms of the Air Zimbabwe Corporation Repeal Act No.4 of 1998.The airline is therefore registered as Air Zimbabwe Pvt Ltd REG NO.10852/97 and conducts its business as such. The airline has been a member of the International Air Transport Association [IATA] and is also a serving member of the African Airlines Association [AFRAA].

Lets talk about what we can build together

Whatever may be your requirements - Simple, clean, complex data driven websites, application systems, our team is scalable to deliver world class solutions to help your business.